I’ve been fascinated by Forth and concatenative programming for a while now. I can’t remember how I initially stumbled in to it, but once I got going I’ve been unable to stop. I’m a wee bit in love with it.

Wanting to play a bit with implementing my own spin on things and having opinions about tooling, I picked up a little scripting language called Ripen, by Felix, and started to extend it. I call the results Guava.

Guava is a stack-based, concatenative language and editor for the browser intended to be used for scripting and as a DSL for small web projects.

It is a toy for exploring concatenative language design, and the DOM. It could also easily be used as a scripting interface for a larger project. It is likely to change a bit over time, and is by no means done — but I think it is in a pretty decent state for a toy to draw to the DOM.

Guava is an unusual language inspired by other unusual languages. While not strictly necessary, being loosely familiar with Forth is helpful when playing with Guava. Guava isn’t a Forth, but it is closer to a Forth than it is to something like JavaScript, C, or Lua.

Here is a good place to start with learning Forth. Or here, and for fun, here, too!

A major goal of Guava is keeping the entire language tiny and easily learnable. With this as a goal, the dictionary is kept relatively limited.

The dictionary is broken into 2 categories — words and sigils.

Words are akin to keywords or in-built functions in other languages while sigils are prefixes that guide the interpreter, switching it into different modes (roughly speaking).

Like most stack-based languages, Guava relies on reverse Polish notation and a LIFO — “last in, first out” — memory stack.

The stack is how data flows through a stack-based language where data is added and removed from the “top,” sort of like a stack of dishes. At first blush it seems like stack manipulation is all that a programmer using a stack-based language would be doing all day long, while in reality most folks using stack-based languages tend to keep the stack pretty shallow — Guava also offers an escape hatch, allowing for easy use of variables outside of the context of the stack…which some may say is cheating, but we don’t need that kinda gate keeping.

For more info on how to use Guava take a look at the cookbook.

A lot of programming languages are pretty similar to one another — once you learn the core constructs of programming (control flow, data handling and storage, etc.) it becomes relatively easy to pick up new languages…the hiccup, I find, comes from needing to learn new tooling. Tooling can be inscrutable, and it is often assumed that you just sort of know it…but it is rarely really taught. For this reason an editor is provided for Guava. 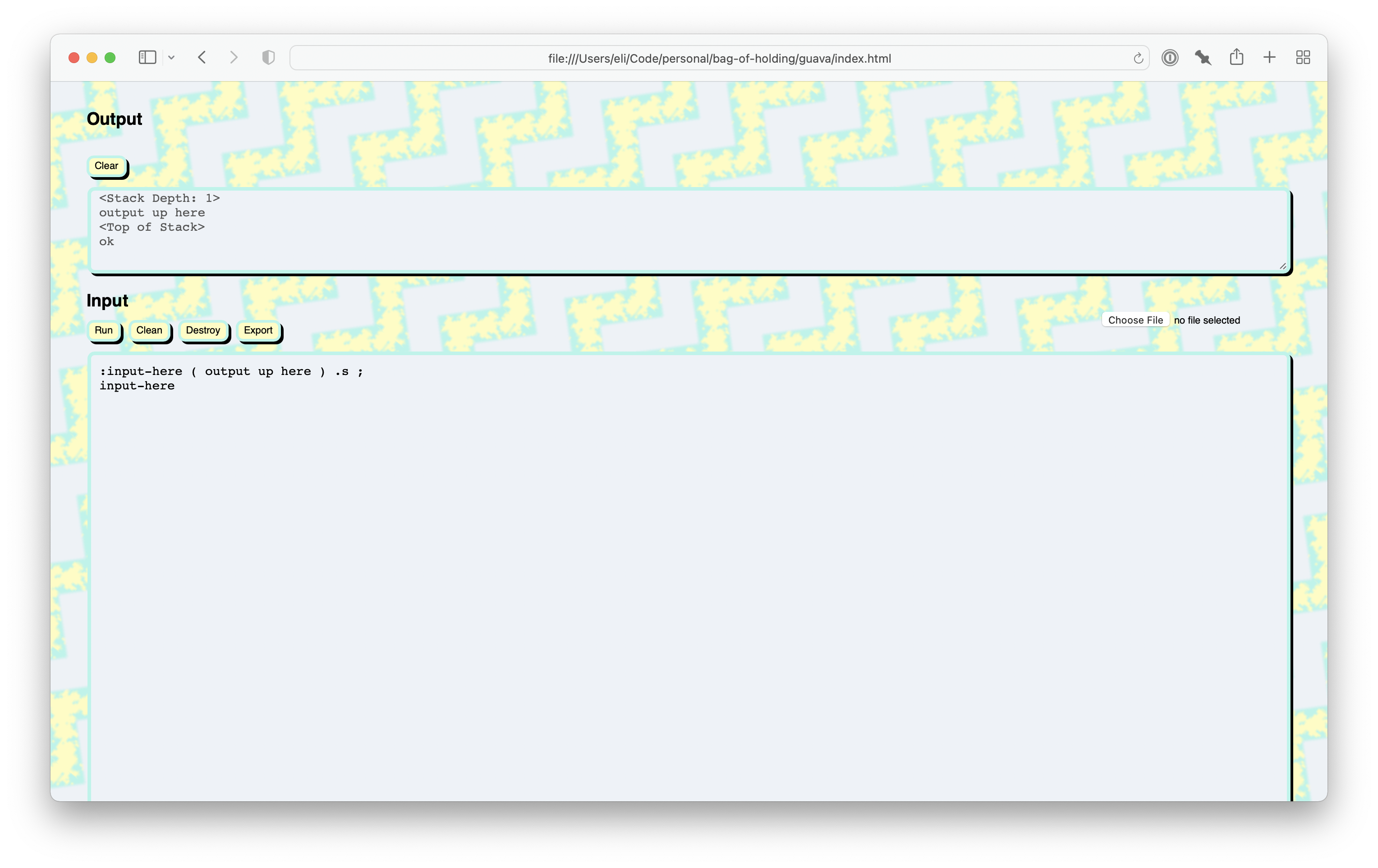 Code can be input into the lower textarea, clicking the “run” button will interpret the code. Any text entered into the textarea is saved to the browser’s local storage with each keystroke.

The “clean” button empties the stack and clears the data from the output area.

The “destroy” button completely clears all inputted code and resets the environment.

Clicking “export” prompts to save input code to disk.

At the far right is a “choose file” button — this allows you to load data from disk. NOTE the data is read in from the disk, but any edits aren’t saved back to the disk unless you click the “export” button.

An instance of Guava is currently accessible at https://txt.eli.li/pb/guava.

Ripen was originally released under the ARTISTIC LICENSE 2.0. With permission from Felix, Guava is licensed under the MIT LICENSE.